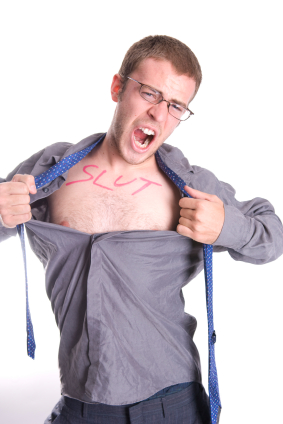 I know in society that there are many double standards between men and women.  It can seem extremely unfair, that men can be treated differently then women. Many people believe its because men are trying to have more then women.  And I’m sure there are many small men with little napoleon type egos that need to do that to make themselves feel better. However, many double standards have a strong base in our genetic makeup.

1) Women are born with all the eggs they will ever need to reproduce.  Men produce new sperm cells all the time.

3) When a woman gives birth it is 100% confirmed that the child is hers.  Men in the past were never to know for sure if a child was theirs or not.  Which is why babies tend to look more like the father when they are born, to reassure the father it is their child.

The sexes do have two similarities when it comes to reproduction.

1) A desire to pass our genetics onto the next generation. To reproduce and have children, who are genetically similar to us.

2) Both sexes are looking for the strongest genetic partner to reproduce with.  This gives their offspring the best possible genetics and a better chance to thrive within the world.

Understanding this, why is it that women can be considered sluts, but men are not despite sleeping with the same amount of people.  Essentially it comes down to the differences in our genetic makeup.  Since women only have a small number of eggs to reproduce with, can only become pregnant a limited number of times and will be left raising the child once born, it is crucial for a woman to be highly selective about the man she chooses to reproduce with.  Essentially she needs to protect her eggs from genetically inferior men.

Men subconscious understand this concept.  Therefore, when they see a woman that has slept with a multitude of men, an alarm goes of inside their head.  This is a message that tells men, there is something wrong with this woman genetically.  Instead of protecting her eggs and being selective, she is doing the opposite.  She is not the genetically strong partner, that men are looking for.

Also remember that men are never 100% sure that a child is theirs.  If a man reproduces with a woman that has many sexual partners, the likelihood of the child being theirs is even less.  Since men are genetically programed to pass on their genetics and find the strongest partner, this woman would not be a adequate selection for those needs.

This does not mean that a man will not sleep with this kind of woman.  In fact, since men never know if a child is theirs and men are capable of reproducing sperm cells so quickly, it is genetically beneficial for him to sleep with this woman.  As the more women a man sleeps with the better chance he has that his genes will be passed onto the next generation.  This does not mean, he will stick around to be a father.  He believes this woman to be genetically poor, therefore the children will be genetically poor, so his desire to raise those children is not there.

This is why men are considered studs for sleeping with so many women, because it has increased their chances of passing on their genetics, while women are considered sluts for not being more selective about the men they sleep with.  Any child a woman gives birth too, will remain with her.

With that said, there are many social factors that come into play and stop most men from sleeping with hundreds of different women and leaving behind a slew of fatherless children. A man with a number of children that he has never seen, or helped in their raising is considered a deadbeat and is of poor genetic stock.

This does not mean that men never want to raise children.  What it means, is that a man is in search of a genetically strong woman that has been extremely protective of her eggs, which shows she is genetically stronger and increases the chance the child will be his when born.  Then he will want to stick around and raise those children, as they have the best chance for survival.

I know people today use condoms, the pill and other forms of birth control.  The male mind may consciously know this, but subconsciously his genetic programing is telling him something else. While this may be a double standard and a poorly worded phrase, I hope you now see why this double standard came about.