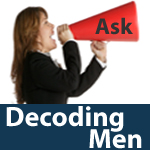 I’ve been dating this guy for a couple of months, it has been very intense, he is a wonderful guy, things seemed to take a natural course – peck on the cheek when we meet, texting and phoning then meeting more frequently, he’s even told his folks about me. He talked of how he’d love to take me away for the weekend, things we can do later in the year, sounding me out about whether i’d relocate etc. He’d even told me he loved me, or rather, asked if I would be scared if he told me he loved me (not the same thing, I know). The inevitable then happened and we slept together only a few dates ago. It was amazing and he can’t get enough of me in that department, barely speaking to each other before we have to get into bed first and then talk later. I’ve since also said I loved him and he seemed delighted; telling me over and over again that he loves me, even putting ‘love’ or ‘lv’ at the end of all his texts. I should be on cloud 9 right? Wrong! Maybe I’m being supersensitive about things but already he doesn’t text as often, doesn’t talk about future things to do together, doesn’t always say ‘love you’ when we end a conversation or say goodbye to each other after a date. After meeting up last night, he didn’t even ask when he could see me next (which he always has before)……i’m started to get majorly worried though haven’t said anything to him. I really love this guy and can actually see a future together but I’m scared of getting hurt if he doesn’t feel the same way. He is 46; am I dating a serial monogamist? Should I start playing it cool and making other plans and maybe trying to give less of a damn about where things are heading?

I’ve actually been a serial monogamist. What drives us is fear – fear of disappointing our partner, fear of being alone, fear of pushing too fast, etc. On a first date once, I actually asked the lady if it was ok to kiss her – she thought it was adorable, and I was just glad I didn’t step over a line. So his “would you be scared if I told you I love you” comment falls right in that path – he’s testing out “the L word” to see if it fits with you.

The problem with this type of personality is that he’s probably both amazed he’s made it this far into a steady relationship, and gotten acclimated to you and your reactions. While this may sound good, it’s actually not. Fear, while an unpleasant sensation, is also a driving force that spurs him into action; conversely, the lack of fear makes him complacent. This could account for the cooling you’re experiencing – he’s started to take you for granted and is getting lazy. Or even worse, possibly bored.

It’s time to express your concerns to him, but do so carefully. His fear of losing you might kick into overdrive and he’ll say anything to keep the status quo – including making promises that he won’t keep in regards to giving you more attention. If I can be vain and suggest turning the first two paragraphs of my reply into a conversation starter, if he is a serial monogamist then maybe he won’t be so quick to cower if he hears that you understand his position.

This could be one of two scenarios.  Worst case, he is trying to pull away and end things.  However, most guys are not known for their subtlety.  I would be surprised if this was his ‘exit strategy’ because most guys I know wouldn’t even notice these incremental changes in a relationship.  Which points to scenario two: He is getting used to being with you.  It sounds terrible, but as the thrill of discovery wears off and two people get used to one another, so the little flourishes in the way they relate tail off too.  It is usually a much quicker process for guys, and I think it is what you are experiencing.  He doesn’t feel any less attracted to you; he’s just getting a little lazy.  Take it as a good sign in that he has become comfortable enough in the relationship that he isn’t constantly trying to keep you coming back for more; he feels like you are safely ‘his’ now.  However, before he gets too complacent it wouldn’t hurt to remind him that those ‘little things’ matter to you, and he isn’t so home-free that he can take you for granted.  All it takes is a little reminding that you need to feel special and I’m sure things will perk back up again.

As men get older, many tend to act faster in the beginning of a relationship.  Most men don’t want to be alone the rest of their lives, and they also don’t want to have children when they are 60.  Don’t forget older men have played all the games and are probably tired of it.  None of the games work, so instead he is being direct and to the point. Many of these men are very intense and passionate about finally starting that life they have been working so hard towards.

One other factor also intensifies a man’s responses and reactions towards a woman and that is his quest for sex with her.  The longer a woman holds out on a man, the more intense he will become about his desire for her.  Essentially this man was never in love, he had a deep desire of lust and a fear of being alone that were driving his emotions.

Once you slept with him, he no longer has that massive hormonal force that is pushing him and his fear of being alone is gone.  Now he doesn’t have to put that attract effort into the relationship.  Don’t worry, most guys are like this.  Now what you need to do is change his lust which is slowing waning and turn it into love.  You can do this by creating life experiences with him.

For example if he loves football, buy some tickets for him and yourself and go to the game together.  If he really likes to exercise by going for long hikes or kayaking, try going with him.  Ask him if there is anything that he has never done before that he has always wanted to try and then do it together.

Once you have done a few things he likes, ask him to join you doing something you like to do.  Pick an activity that you both can bond over and that he can potentially like.  Going makeup shopping is not going to be an activity that he will like or want to do.  While you are doing something you enjoy, remind him how sexy he is and how much it turns you on having him there with you.  Now you are linking something you like, an experience you are sharing together with his lustful thoughts.  This will make him want to do more things with you.

Lastly, don’t wait for his calls.  Continue to live your life, the way you did before you met him.  This means go out with your friends, see your family, continue to do everything you did before.  Let him know that you are busy but if he wants to get together, that is fine, but he will have to plan ahead. Instead of just assuming you are going to be there for him.  These are all things that force him to step up to the plate and make you a more serious part of his life.